Does the fluidlab apply to your use case?

Fast, precise and innovative: Scattering measurement with the fluidlab R-300 spectrometer from anvajo

The term "turbidity" refers to the reduction in the transparency of a liquid. This is caused by undissolved particles in the liquid.1 Scatter measurement is a routine laboratory procedure for checking the growth behaviour of bacteria.

For this purpose, the optical density (OD) of the bacterial suspension at a wavelength of 600 nm is measured with a spectrophotometer and indicated by the absorbance value.2 A frequently occurring problem is that the absorbance value can vary from photometer to photometer, so that no meaningful comparison of the values is possible.

Thanks to the special adapter for scatter measurement that the R-300 comes with, this variation can be reduced and the measurements performed on different instruments are more comparable.

What causes turbidity in liquids?

In general, suspended solids are undissolved solids that are in water phase. Due to their small size and low density they are in suspension. They are therefore part of a two-phase system forming the solid phase. Suspended solids can consist of organic, but also inorganic material.

This also includes dead material. As long as there is a certain turbulence in the liquid, which keeps the suspended matter in motion, it is called suspended matter. However, if these are no longer in motion, the solid particles sink and are referred to as sediment. At the bottom they eventually form the sediment.

To be able to measure the scattering it is important that the particles exist as suspended matter in the liquid. They must be well distributed in the liquid, which is achieved by pipetting or mixing the liquid.

It is necessary that this step is carried out shortly before the measurement is executed and that the suspension does not remain still for too long. Thus the designation of these solid particles depends on the local hydrodynamic conditions.3

Suspended particles are formed when two phases with different properties are mixed. In this case they do not form a homogeneous solution, but rather a suspension, for example. Thus, bacteria in a liquid also cause turbidity. The light that passes through the suspension is scattered by the cells causing turbidity within the liquid. The more cells there are, the greater the scattering.

In Consequence, the turbidity of the suspension increases as the cells multiply.4 By checking the growth, it is possible to determine which growth phase the bacteria are in. In this way, the ideal time for cell harvesting can be determined.

How can the liquid turbidity be measured?

The turbidity of bacterial suspensions is measured using a spectrophotometer. Light is lead through the liquid so that the light that is not scattered by the liquid can be measured by the detector.

The scatter measurement during bacterial growth is usually performed at the following wavelengths:

Although the instrument is more sensitive at shorter wavelengths, measuring the density of a cell suspension at longer wavelengths gives more accurate results. 5

What does the turbidity level depend on?

The scatter measurement’s value depends on the amount of solid particles that are present within the liquid such as bacteria. The more particles, the more light is scattered which also leads to a higher extinction.

Which factors can have a disturbing effect on the measurement?

During OD measurements, air bubbles may form and cause measurement errors. For this reason, it is key that motion caused within the suspension is kept at a low level at any time while the measurement is performed.6

The adapter of the fluidlab R300, specially adapted for scatter measurement, also ensures comparable results with a low measurement error.

Advantages of scatter measurement with the fluidlab R-300: Easy to handle, fast result, independent of location

Scattered light is difficult to capture accurately. Many spectrometers are not properly validated for this type of measurement. The special adapter for the measuring chamber of the R-300 though allows a precise reading of the light signal.

Scattered light measurements performed using the fluidlab R-300 are validated with scattered radiation standards, so that reliable and reproducible results are achieved. Consequently, a higher comparability between the instruments is given, making it easier to compare results generated on different fluidlab R-300 instruments.

The spectrometer of the R-300 covers a wavelength range from 375 nm to 700 nm. Thus, a large part of the spectrum is covered. The spectral resolution is 2 nm.

As the device is small and portable, it can be used on the move and does not take up much space beneath the sterile workbench.

Additionally it can be used both as a cell counter and a spectrometer. In this way, the most important tools needed in a laboratory environment are combined in one single device. Independent of the cell size, statements about the cell density can be made.

How does the scatter measurement with the fluidlab R-300 work?

It is important that standard cuvettes with a maximum capacity of 4.5 ml or 3 ml are filled with at least 2.5 ml or 1.5 ml during measurement.

Before the turbidity of the cell suspension can be measured, the liquid is pipetted up and down so that the cells are distributed as evenly as possible. The fluidlab R-300 uses LEDs as a light source which is switched on just before the measurement is carried out.

In our detailed introduction video for the anvajo fluidlab R300 we have summarized all necessary information for you to get started: How a measurement is performed with the R-300 and how the cuvettes are used.

What kind of equipment is required for the measurement procedure?

Only the fluidlab R-300 is required for scattering measurements. It comes with the necessary software to carry out the measurement and analyze your results. No other devices or tools are needed. Furthermore, it is not necessary to purchase or extend additional licenses. Standard cuvettes (10 x 10 mm) can be used for scatter measurement. However, the appropriate adapter should be used.

How does the fluidlab R-300 output the test result of the measurement?

After the measurement, the absorbance value at the preset wavelength is shown on the display; this is the attenuation of the light signal, for example at 600 nm.

In addition, the entire absorption spectrum of the liquid is measured at a range of 375 nm – 700 nm and then displayed by a spectral graph.

The two green cursors can be moved manually within the graph, which allows you to display absorbance values at other wavelengths. 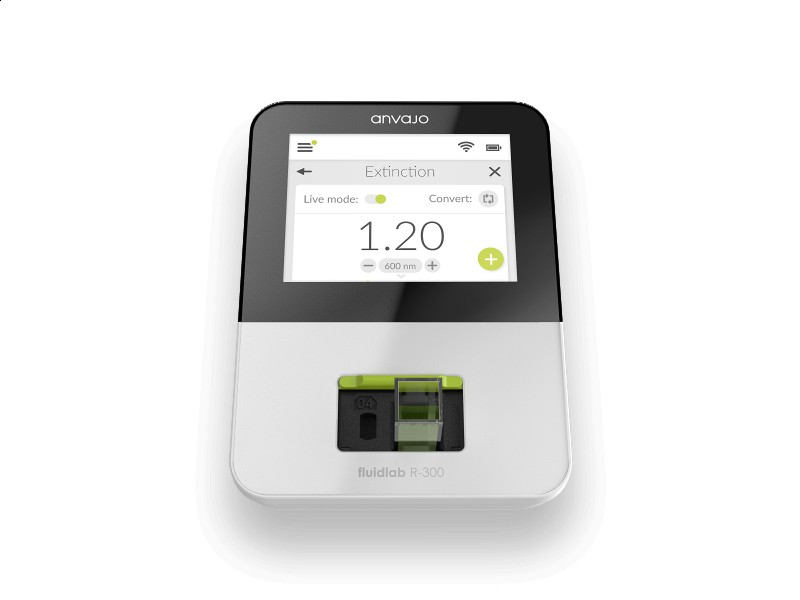 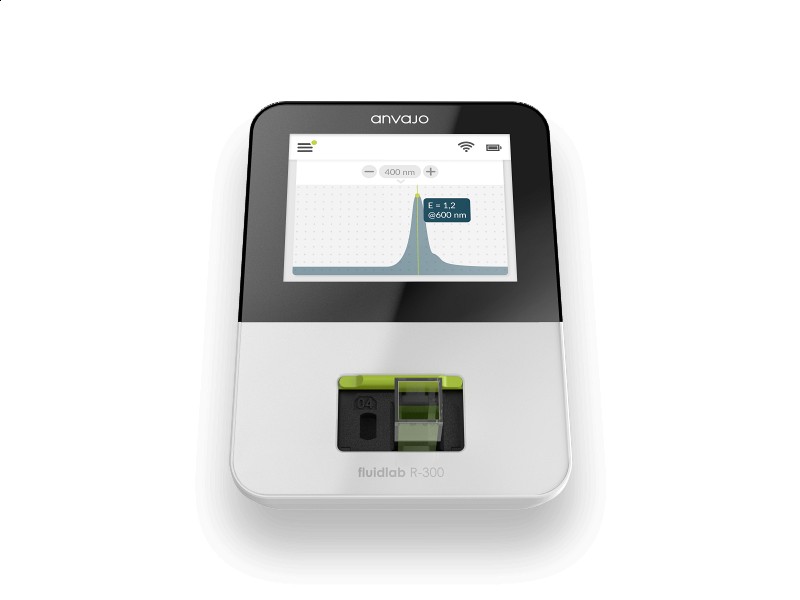 In which departments can a scattering measurement be performed with the fluidlab R-300?

The device is CE-certified and must therefore be checked individually against the requirements with regard to further department-based quality criteria that must be fulfilled.

The device is not certified for medical use and is therefore not authorized to be used for the examination of human medical material on the basis of a diagnosis.

Aside from that, the R-300 is suitable for a range of research purposes such as basic research. In some areas the device is already in use.

In university institutes for biology or medicine, the R-300 is used in practical laboratory courses for research in the following areas:

In biotechnological companies the device can be used for:

Furthermore it can be used in breweries for:

The fluidlab R-300 falls in the same price range as other spectrometers. However, it offers features that conventional spectrometers do not have. The R-300 is more than just a spectrometer: it is also a cell counter.

Thus it combines two instruments in one handy device with a convincing price advantage.

For a flawless start the fluidlab R-300 comes as a set – containing all necessary components:

Innovation for your workplace: Increase the quality of your liquid analyses

For universities, institutes or companies anvajo offers discounts or privileges – if the order includes a higher number of items. In order to benefit from this special service we kindly ask our customers to contact us in advance.

Are you interested in the acquisition of several devices for your research group, practical courses or company locations? Then you are welcome to request a quote.

Since the fluidlab R-300 comes with pre-installed software, it is ready to use when received. Software and licenses do not need to be purchased or extended subsequently.

For more information about the fluidlab R-300 please visit our homepage or contact our sales team.

Would you like to know how the R-300 performed and what users have already experienced? Read our user interview with Patrick Rüdiger from BASF.

Would you like to test the fluidlab R-300 for free?
Contact us here for a two-week trial.

Inga Pacharzina is studying biotechnology at the Technical University in Berlin, where she is completing her Masterr's degree. Her enthusiasm for biology was awakened when she first heard about the endosymbiont theory at school. From that time on she wanted to know more about the intelligent processes that can be found in nature and how they work. With biotechnology as a course of study, she was able to get to know the many different areas of biology and its importance in connection with other sciences. In November 2019 Inga joined anvajo, where she is working as a student in marketing and supports the team with scientific contributions.

The fluidlab R-300 is the smallest, most comfortable laboratory instrument on the market. It combines a full-fledged spectrometer with an automatic cell counter.